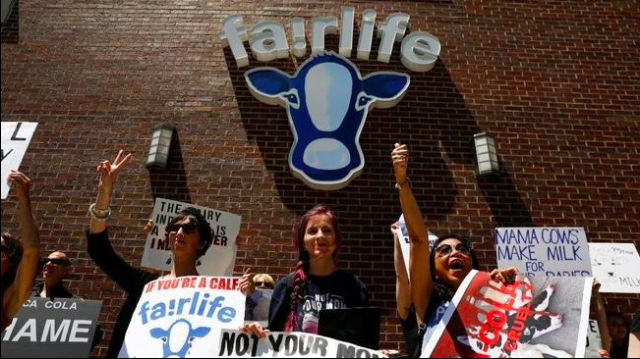 The life of the animals at Fair Oaks Farms is not as “fair” as it has been made to seem. Fair Oaks is under enormous scrutiny after an undercover investigator captured footage of calves being abused, demonstrating the mistreatment of these animals as simply profitable products.

What is Fair Oaks Farms?

Fair Oaks Farms is located in Northwest Indiana and is a popular tourist site, where people can learn about their farmer and the food they produce. Fair Oaks currently maintains about 36,000 cows and is over 33,000 acres (51.5 square miles) in size. They are popularly known as one of Fairlife’s suppliers.

You may recognize Fairlife’s milk products from its distinct blue bottle (as seen below). The founders of Fair Oaks Farms, Mike, and Sue McCloskey established Fair Oaks in 2004 promoting transparency, sustainability, and animal welfare. Fairlife explains on their website that “As dairy farmers, we treat our cows with the utmost care, because we know that their health and happiness are the foundation of our business.”

Animal Recovery Mission (ARM) is an animal welfare not-for-profit organization with the goal of eliminating the pain and suffering of animals through the investigation and exposure of illegal and cruel animal practices. On June 4th, 2019, ARM released footage from the “largest undercover dairy investigation in history.”

ARM sent in an investigator hired by Fair Oaks as a calf caretaker. The investigator saw countless red flags right from the start, receiving no training and observing violent behaviors during the first few hours. ARM quickly realized this was likely Fair Oaks Farm’s normal behavior and method of production.

What can be seen in the videos?

The investigator witnessed countless inexplicable acts during their time at Fair Oaks. The abuse included the hitting and punching of cows and the breaking of bones as a form of punishment.

he investigator observed farm employees using aggressive tactics like pushing, punching, and kicking the cows’ udders and reproductive system as a way to force the cows into their stalls.

As if this was not enough, the investigator also documented the poor health of the cows. The investigator noticed that many cows had infected udders, bleeding tails, infected eyes, and concerning limps.

Yet, none of these cows received any medical attention. Instead of treating the animals too weak to stand, farmers were seen yelling, hitting and placing straps around the cow’s legs to keep them from slipping.

Cruel and harsh treatment was also noticed during the milking process. The investigator caught cows falling from the rotary through bars, which can be dangerous due to the height of the fall and the weight of the cow.

A rotary parlour speeds up the milking process by having the cow stand on a circular raised platform, where the farmer can easily attach the milking machine from below (as seen below). Animals who were in pain and could not cooperate were seen being abused and mistreated.

A common practice in the dairy industry is to separate cows from their offspring after giving birth. However, this can be a traumatic experience for both the cow and the calf.

After birth at Fair Oaks, instead of giving the cow time to heal and connect with her calf, cows were sent to the rotary for milking. Meanwhile, the newborn calves were placed into small sheds where hundreds died from starvation, hypothermia, and dehydration.

This treatment clearly contradictions Fairlife’s website claiming that “Newborn calves are visually monitored daily and are given immediate and proper medical treatment should they become ill.”

Fair Oaks Farms. Mark McCloskey produced a video in response to the ARM footage, apologizing for the acts conducted by Fair Oaks’ employees. He explains that the four employees in the ARM footage went through animal care training before they were hired and signed a document stating that they would report any employees seen harming animals. Three of the four employees were reported and fired before Fair Oaks knew about the ARM undercover video investigator, indicating Fair Oaks’ employees were following their reporting policy. The fourth employee was fired after the footage was made available.

McCloskey shared plans for installing cameras around the farm anywhere there is an interaction between animals and personnel. The footage from these cameras will be observed 24 hours a day by a trained individual, who will monitor the screen and make sure no animal is suffering. McCloskey also intends on opening an animal welfare exhibit that will stream live footage from these cameras for the public to see.

McCloskey has declared that Fair Oaks Farms will increase the frequency of random audits to once every two to four weeks, which is quite frequent in the industry. McCloskey assured that the audits will be done by one of the best animal welfare organizations in the country. You can watch McCloskey’s full statement here.

Fairlife. A statement was released by Fairlife in regards to the measures they plan on taking to address this incident. Fairlife will no longer source milk from Fair Oaks Farm. They also plan on increasing their number of random audits, visiting all 30 of their supplying farms and requiring annual recertification in animal welfare (done by a third-party) by all farmers from supplying farms.

GreenChoice is saddened by this news and hopes that serious measures will be taken to prevent such animal welfare violations in the future. We are developing an Animal Welfare system to simplify making ethical food choices!

In the meantime, we are happy to answer any questions you have about the animal welfare certifications and claims you see on meat and dairy products at the grocery store. We know it can be a bit overwhelming to understand when their standards meet your values, and we’ve worked with food ethics and animal welfare experts to better understand the many certifications and claims that are out there.

GreenChoice offers you product-specific health & sustainability insights and scores for over 55,000 food and beverage products, so you can easily compare products for food safety, processing concerns, nutritional value, and environmental impact. Download the GreenChoice app now for free on iPhone and Android and find foods fitting your dietary needs, values, and budget!