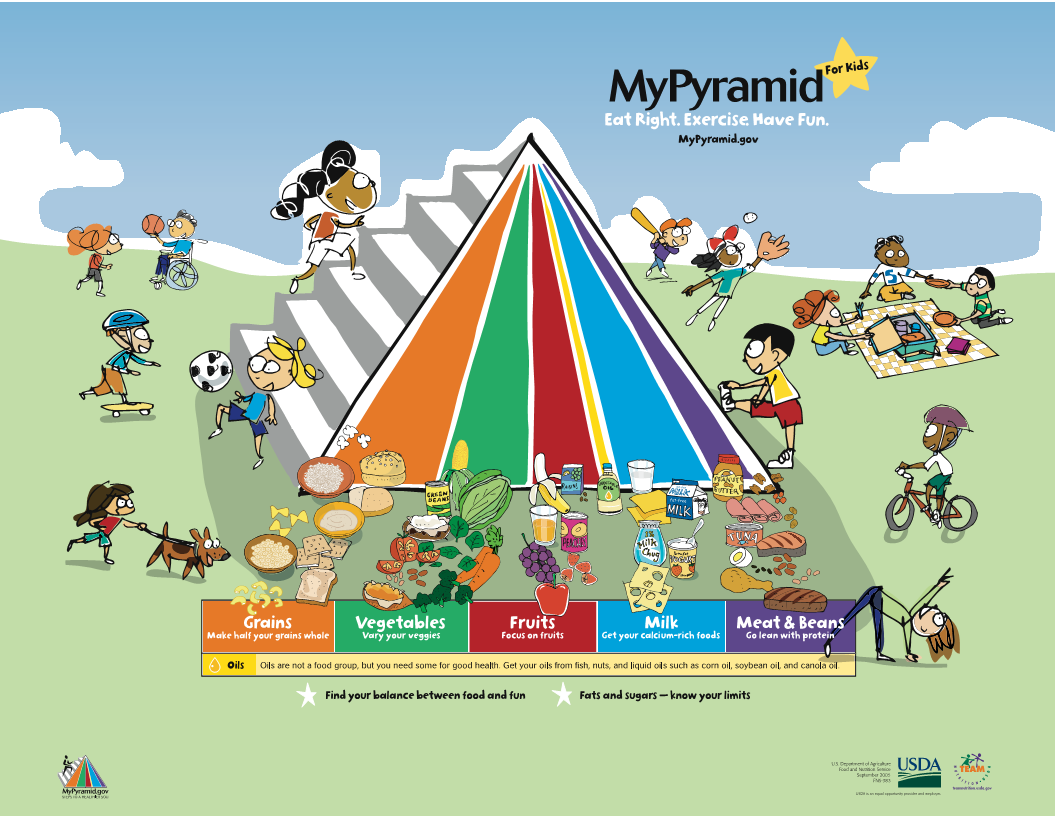 How do you know what food is healthy? Do you read the nutrition facts looking for calories, sugar, or fat content? Do you look for government-approved labeling, certifying the item as organic or non-GMO? For most Americans, their understanding of what is “healthy food” comes straight from Uncle Sam’s food pyramid.

There are 1,000s of food products that won’t be right for you

Let GreenChoice find the ones that are

Tell us your dietary needs & values and we’ll show you foods that match!

Basics of the USDA Food Pyramid

Born in 1984, the USDA’s five food groups laid the foundation for the USDA Food Guide Pyramid – first published in 1992 and revamped in 2005. In 2011, the USDA replaced the food pyramid, then known as MyPyramid, with MyPlate (1). Every five years, the USDA releases a new set of Dietary Guidelines, and for nearly 20 years, the food pyramid was the symbol of these guidelines.

With such broad influence, it’s no surprise that the USDA Dietary Guidelines often undergo careful scrutiny and have been quite controversial over the years.

For example, throughout the late twentieth century, the USDA’s Food Pyramid made fat content the devil, pitting it as the cause of heart disease and cancer (3). However, many nutritionists and food scientists now paint a different picture, claiming that a diet rich in refined carbohydrates, often synonymous with the base of the Food Pyramid, brings more people to the hospital.

Since 1980, when the USDA issued its first Dietary Guidelines, the number of Americans who are obese or have type 2 diabetes has more than doubled (4, 5).

We’re taught that healthy food is low in sugar and calories, that we need carbs from grains, calcium from milk, and protein from meat, but the reality of “healthy food” is much more complicated than it seems.

In 2010, the Supreme Court released a ruling in a landmark case, Citizens United v. FEC. This case dealt with the intersection of the First Amendment and corporate spending, concluding that “corporate personhood” applies in the context of free speech. For a long time, the U.S. government didn’t allow corporations to spend money on political campaigns in an effort to decrease the risk of corruption. However, the Citizens United ruling gave corporations the freedom to contribute money to political campaigns furthering their agenda. As a result, lobbying efforts by large food and beverage producers and brands keep their interests embedded within public food and health policy.

With significant power over legislation, major food and beverage companies have a huge influence on what gets published in the USDA’s Dietary Guidelines, and subsequently, what the Food Pyramid looks like.

Last year, 237 clients lobbied the food industry, releasing 933 reports (6). In 2015, as the USDA was releasing its 2015-2020 Dietary Guidelines, 255 clients lobbied the food industry, releasing 1,176 reports (7). Some of the lobbyists’ largest clients come as no surprise and include the likes of PepsiCo, Coca-Cola, Monsanto, Nestle, and McDonald’s, to name a few. When dealing with massive multi-national corporations such as these, you can be sure that large sums of cash are involved. So, how much does the food industry spend lobbying U.S. food policy and regulation?

With the meat and beverage industries deploying such large sums of lobbying dollars, it is no coincidence that the 2015-2020 USDA Dietary Guidelines downplay some important facts, compromising our nation’s health in order to appease some of America’s largest food producers.

While the guidelines clearly state the importance of reducing dietary saturated fat, added sugar, and sodium in their executive summary, they leave out a critical detail — the main sources of these nutrients (14).

For example, it isn’t until the reader takes a deep dive into the belly of the guidelines that they discover consuming less red and processed meat can significantly decrease one’s risk of obesity, heart disease, type 2 diabetes, and certain cancers. Even then, the document is written towards nutritionists and health professionals, making it difficult for the average American to understand, let alone interpret correctly and apply to their daily food and beverage choices.

Besides offering vague and indirect information, the striking difference between the USDA guidelines and other health authorities’ may also point to industry influence, particularly in the case of dairy.

The USDA recommends most people should consume three servings of dairy daily, while the Harvard School of Public Health recommends limiting dairy to just one to two servings per day (15, 16). Harvard cites there is little evidence to suggest dairy is essential for health, yet there is “considerable evidence” that too high a dairy intake can be harmful (17, 18).

The stark disparity between the USDA’s and Harvard’s recommendations for dairy illustrates the influence food industry lobbyists have on our perception of what is “healthy.”

Furthermore, the USDA completely axed sustainability considerations from the Dietary Guidelines despite its own Advisory Committee recommending food system sustainability be incorporated into the dietary recommendations (19). Sustainable farming, herding, and manufacturing processes are ones that preserve resources and have minimal impact on the environment. Eating sustainably attained food, such as crops grown without toxic pesticides or pasture-raised cattle, is generally better for the planet (20, 21).

The USDA’s Dietary Guidelines signal our health and the environment come second to the deep pockets of a small group of profit-driven corporations that control America’s industrialized food system.

Why does the food pyramid matter? The heavy hand that major food and beverage companies have on the USDA’s Dietary Guidelines is deeply disturbing when you consider the influence they have on America’s understanding of what is a “healthy diet.”

Despite billions of dollars invested in healthcare and medical research annually, childhood obesity is on the rise, the prevalence of type 2 diabetes is higher than ever, and heart disease is the leading cause of death, killing 647,000 Americans every year (22, 23, 24). It’s hard not to wonder how much of our nation’s decaying health is a product of the deception fueled by big food and ag spending and amplified by the U.S. food pyramid.

If there’s one thing that the U.S. food pyramid teaches us, it’s that the truth is in the details and that the details are complicated. Nonetheless, hope for a healthy America is not lost. There are a growing number of unbiased organizations working to simplify nutrition and help the American people make healthy food choices.

There are 1,000s of food products that won’t be right for you

Let GreenChoice find the ones that are

Tell us your dietary needs & values and we’ll show you foods that match!

Editor’s Note: This post was originally published on September 17, 2017, and has been revamped and updated for accuracy and comprehensiveness.

GreenChoice, pbc is a climate-positive marketplace for conscious consumers with dietary needs. Shop over 10,000 natural & organic food items, with 90+ dietary filters and GreenScore ratings–color-coded health & climate ratings, that turn hours of research into seconds. We deliver to your door in 3-5 days and offset 2x the carbon footprint of your entire order–products, packaging, and shipping.

When I read ” a diet rich in carbohydrates, the base of the Food Pyramid, brings more people to the hospital.” I have to wonder if the meat industry sponsored this article. Whole carbs are health producing. Animal proteins, added salt, sugar and oils bring people to the hospitals. Where do you find that unprocessed carbs cause health challenges?

When people eat a food containing carbohydrates, the digestive system breaks down the digestible ones into sugar, which enters the blood. As blood sugar levels rise, the pancreas produces insulin, a hormone that prompts cells to absorb blood sugar for energy or storage.

Thank you for this background information, Jerry!

When I followed the guidelines set out in the pyramid I developed psoriasis and put on weight.
I moved to a higher fat low carbohydrate diet and lost weight and the psoriasis disappeared.
The guidelines are driven by commercial interests and are inimical to good health.